According to the agreement with SFR System manufacturer, to complicate unauthorised base unit programming and competition vandalism, one willing to obtain his first short-term extended license should provide proof of SFR readout unit ownership.

To provide a valid proof, please send an image with "SFR Reader" text and SFR readout unit (sample) to the srgttv@gmail.com.

With NFC turned on, just tap smartphone to the card to read data.

If this does not work, make sure the card is located near the NFC antenna zone. Some devices have it at unexpected places such as top edge.

Tapping against the same card for the second time would show message "The data are already read".

One can set it manually after each reading operation, or in semiautomatic and even fully automatic way. To speed the process up one can upload list of athletes from a text file (UTF-8 encoded) or SFR Smart Terminal, or SFR Event Centre database, to choose the correct name from the list. If the ahtlete in the list has a card number, then SFR reader would automatically use that name for the card.

You can use Excel or any similar program (Open / Libre Office) to prepare the list and save it as CSV-file.

SFR Reader would display the number of uploaded teams and proceed to the teams list or show an error message for ill-formed files. 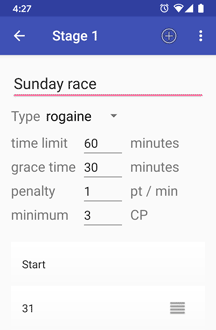 Each course consists of at least one stage (the only one usually). Every stage has a type (regular, rogaine, choice), a set of control points, and some other parameters like time limit, minimum number of control points, late period and late penalty (for rogaine type).

Mixed courses contain several stages of regular and choice types. It's impossible to mix stages of rogaine and other types in one course, since rogaine result is counted in points, while other types use time and number of visited control points.

Having any courses added, SFR Reader would try to assign a course to a result, when the athlete's card is read.

If SFR Reader succeeds to assign a team to the result, a team has a course name assigned, and there is a course with such a name in SFR Reader, this course would be used. Otherwise SFR Reader would suggest the shortest course among those, at which the athlete has visited maximal number of control points.

If there is a course defined, SFR Reader validates each result, and uses it to show and sort results in a proper way.

Result is considered valid, if all stages of the course are passed. The stage is considered passed, if all required CPs are visited (for regular stages — visited in the correct sequence) and stage time limit is not exceeded (exceeded for no more than grace time for rogain stages).

Possible results are OK (all the stages are passed, no time limits exceeded) and different variants of DSQ:

If the course is changed somehow: CP is added or removed, time limits or even course type is changed, then SFR Reader would revalidate all stored results.

Base units are programmed in 3 steps using a master-card.
Average programming time is less than 1 second.

Some smartphones are known to have very slow NFC data transfer (1-2 seconds per 1 punch, instead of regular 30-100 msec).

The problem models are: